Jack & Julian (I really need to get better at names!) 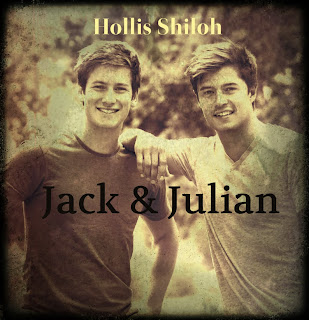 Julian is a doctor, an American who's been living in England since before the War. Jack is English and served his country faithfully during WWII, but now he's a private tutor in a small English village, sent away from the SIS in disgrace for being homosexual.

Julian, limping, closed-off, and blunt, is drawn to the giving and whimsical Jack. And Jack is drawn to the quiet steadiness of the man who might have secrets, but would never take him to bed simply because there's no barmaid handy.

The two forge a relationship in the only way they can just after WWII: secretly. The warmth and caring blooming between them gives them both the safety to share their pasts with one another.

But all is not serene, because someone wants Jack dead.

And Julian can't lose another lover. Not like this. Not again.

"Jack is fine," said the sandy-haired man, facing me. His blue eyes snapped friendly and naughty. He was taking me in, looked like he liked what he saw. I did, too.

I gave him a small nod. "And you can call me Julian. Perhaps we'd best go to the kitchen, where there's more light." I turned away, and he followed.

After a moment, he reached out and took my bag with his left hand. I gave him a startled blink, but let him take it. It felt surprisingly intimate walking with him quietly through that great house. He didn't say anything, and he gave the Gladstone back to me before we arrived in the kitchen.

"How did you hurt yourself?" I asked, even though Lady Jane had already told me over the telephone, calling me up herself apologetically. The new tutor had fallen from a tree and caught his arm on some fencing, and could I come over and stitch him up?

He shrugged. "Foolishness." He gave me that smile again.

He didn't look like any tutor I had ever seen. He had the bluff, confident, laughing looks of a young pilot, or a wealthy landowner's second son. His hair was just that color that is nearly blond, light brown with streaks of paler hair burned in by the sun. He was the type I always fancied. I expected him to be noisy, chattering, but he was silent. I barely looked at him till I was bandaging his arm in the kitchen, sitting at the large, scarred wooden table together, our heads bent over his arm, the sunshine streaming in.

The kitchen smelled of apples. Behind us, the large, comfortable-waisted cook, Mrs. Smith, was peeling them slowly and cutting them one at a time into a pie crust. She glanced over at us. Her competent hands were thick and hardened with work, skin that didn't cut even when she pressed the knife against it, cutting each slice of apple.

The kitchen held a quiet, calm, sleepy warmth. A large bluebottle buzzed lazily around, stopping to bang itself against the window glass and then returning to the pie in progress. Mrs. Smith waved it away with her knife.

Jack still hadn't spoken and neither had I. I washed and stitched his arm carefully in the warm stillness. His hand squeezed tight into a fist at the pain, but he only jerked once, closing his eyes, tightening his jaw, and enduring.

"Finished," I said at last, sitting back, a crick in my back as I straightened. A neat row of stitches ran up his arm, replacing the rough gash from the fence he'd managed to cut himself on while falling.

He looked up and met my gaze, his paler now, almost gray. His eyes held something, almost a plea or a longing, as though he wished to say something but knew he mustn't. He licked his lips and tried to smile. He gave a faint nod, but didn't speak.

"Head between your knees," I said, reaching up and putting my hand on the back of his head, drawing him down.

She moved to fetch it quickly, making it clear she had been watching. I left my hand on the back of his neck for a moment, stroking his fine hairs gently.

Posted by hollis shiloh at 6:08 PM