This short story first appeared in the Dreamspinner Press August 2013 Newsletter as a free read. 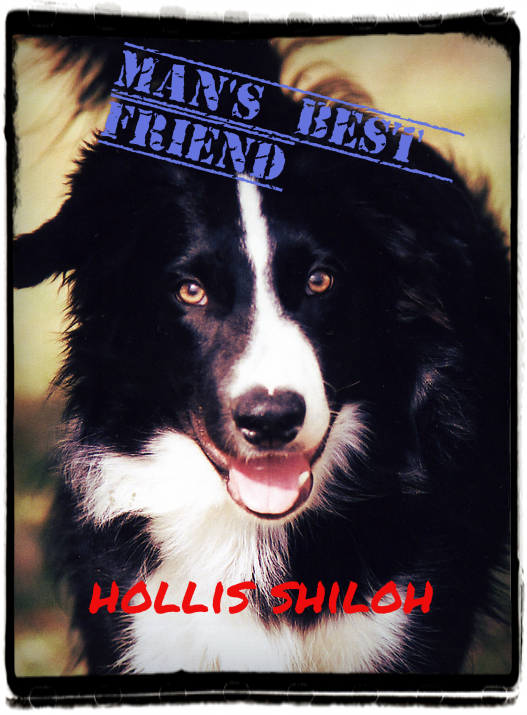 When Harlan walked down the row of barking dogs at the shelter, he knew he was a goner as soon as he saw those big, bright eyes. The Border collie mix with the mismatched ears looked up at him, head tilted on the side, as if waiting for someone.

Hard to leave a dog like that at the SPCA, especially when Harlan was looking for a buddy, a companion to ease his loneliness in a new town and a new job. If meeting a wonderful man didn't seem to be in his cards right now, at least a dog might be.

When Harlan walked the dog, he kept pace easily, as though he could walk all day, right in tune with Harlan, as if on a mission. A funny-looking, beautiful dog with odd-colored ears, one black, one white.

Harlan filled out the papers, passed the background check, and paid the adoption fee, and soon, he was bringing home a bright-eyed dog.

He named him Checkers, for his black and white patterns.

The first few days passed in a bliss of getting to know each other. It didn't take him long before Checkers was sleeping on the end of his bed, a furry, friendly warmth, comforting him through the night. Checkers went from stranger to friend to pal, and was rapidly working his way towards Man's Best Friend.

Then one day, a stranger knocked at the door. Harlan walked to get it, Checkers following politely by his side, as the dog so often did.

A stranger stood there, a man with a half-grown beard and tired, startlingly pale blue eyes. He looked thin in the face, his clothes old and too big for him.

"I think you may have my dog."

Checkers launched himself at the stranger, barking joyously, wagging his tail, his whole body, harder than Harlan had ever seen before. Something caught in Harlan's throat, a bitter, hurt longing. This oddly handsome, down-on-his-luck man was going to take away the one friend he'd made.

Harlan opened the door, frowning, as Checkers and the man greeted each other with more joy than you would think anything deserved. "Why don't you come in?" He held the door open, trying not to let the other man see his hurt and disappointment.

The man hunkered on the front step, roughhousing and hugging the dog. He raised his snapping blue gaze in his chiseled, handsome face and smiled a shy, sweet smile. "Thank you."

"Would you care for some coffee?"

"That would be wonderful." The man stood in the middle of the kitchen, holding his dog in his arms. A powerful man, stronger than he had at first looked, despite being so thin in the face. His faded Army fatigues were baggy on his body, as if he'd recently lost weight.

"How did you come to lose him?" Harlan forced himself to ask.

"I lost my job and apartment. We were scraping by on the street. I worked odd jobs, and Buddy stuck close to me. We were getting by, and I was hoping to get back on my feet soon. Then I got pneumonia, ended up in the hospital. I just got out."

"Do you have anywhere to stay?" asked Harlan, blinking. He had the feeling this quiet man had been through a lot but wasn't going to complain about any of it.

The man lowered his gaze and petted his dog, who lolled and panted in his arms. It hurt Harlan to watch how much they loved each other. Would he never find someone--even a dog--who loved him that much?

"I don't even know your name." Harlan motioned him towards a kitchen chair and brought over two steaming coffee cups.

"Fletch Carol." He held a firm hand out to shake.

"Harlan Brody. Pleased to meet you."

Fletch stroked his dog's black-and-white fur. "I guess he'd have a better home with you. No guarantee I won't end up back in the hospital." His voice was quiet and resigned.

"I wouldn't dream of it," said Harlan heartily. He found himself adding, "Unless you'd like to stay, too?"

The man's gaze rose slowly, disbelievingly to meet his. "What?"

Harlan found he was beginning to blush. "It would be no trouble. You could stay on my couch till you get on your feet."

"Why not?" asked Harlan quietly. "You served overseas, didn't you? I think you deserve a place to sleep off the streets. If nobody else can give that to you right now, I can."

Fletch's gaze stayed on the dog as he stroked it gently. "I thank you kindly," he said softly, in a suspiciously tight voice. "It's been a while--" He cleared his throat and stroked his dog harder. Then he looked up, his eyes bluer than ever. "Been a while since anybody was kind to me for no reason."

And Harlan smiled. "There's a reason. I'll get to be around your dog a little longer."

And your beautiful blue eyes.

The first few awkward days stretched into comfortable weeks. As Fletch recovered strength from his illness, the pinched, haunted look began to leave his face. He would always be a quiet, contained, reserved man. But when he was playing with his dog, or laughing at a TV show the two men watched together, his eyes came alive, practically glowed.

Harlan found them, and the rest of Fletch, more beautiful every day. He told himself not to be crazy. He wasn't going to get a crush on an ex-soldier. He liked artsy men, guys who discussed books and obscure bands.

Except apparently, he liked Fletch best of all.

He hid it. No one must ever know how much it meant to him, sitting side by side on the couch, the snoring dog stretched over both their feet.

The truth was, he was a goner as soon as he saw those big blue eyes.

Then came the day Fletch returned home, a spring in his step that hadn't been there before, his eyes practically glowing. "I got a job." He thumped Harlan on the shoulder and laughed. "That means I can get my own place. I won't be beholden to you anymore, pal."

"Great." Harlan turned away to hide the quick, bitter hurt in his face. You're leaving me and taking the dog too. That's a good thing?

"Also means I can do this," said Fletch in a gruff, shy voice. He moved up behind Harlan and slid his arms around his middle. A surprisingly soft pair of lips pressed against Harlan's neck in a little kiss, and then another, sending shivers all up his spine.

"W-what are you doing?" asked Harlan, a tiny tremor in his voice. He held very still.

"I'm not?" asked Fletch with a soft laugh. His eyes shone with such affection. He pulled Harlan into a real, honest-to-goodness kiss.

Buddy, a.k.a. Checkers, tried to squeeze between them to get in on the affection, wagging his tail so hard there was a cold breeze.

Harlan pulled Fletch in for another sweet kiss.

You can sign up for the newsletter if they'd like to receive free fiction monthly from Dreamspinner Press:  http://www.dreamspinnerpress.com/newsletter/
Posted by hollis shiloh at 11:23 AM