Harry Ever After: a shifters and partners novel 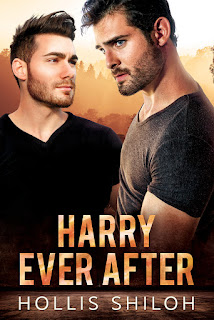 Harry Ever After
by Hollis Shiloh

Police are the enemy. But when the choice is between working with them or letting the pack starve, Clay does his duty as the alpha and takes a job he'd never otherwise have chosen. He doesn't expect to find a certain sheriff so absolutely captivating. Harry makes him want things that are dangerous. After all, everybody knows non-shifters don't make good mates...right?

I watched his hands as he fiddled with the straw wrapper, as he squeezed lemon into his water. He had particularly watchable hands, with character, deft and careful and precise. They were hands that could mesmerize. Not young and smooth, they were large, rather tanned, with prominent knuckles and with some dark hair on the back of them. They were hands that had worked hard, and also hands that were careful. He turned a salt shaker round and it was all I could do not to stare as we waited for our food to arrive.

He'd ordered for both of us. At least, he'd gotten a burger and fries and looked at me inquiringly. I'd just said "Same." I would have even if he'd ordered the worst thing on the menu. I was hungry enough I wouldn't care. Still, I'd heard good things about the food here, and it always smelled wonderful when I was walking past.

It smelled good today, too, but even so, it couldn't distract me from my obsession with his hands.

"So what can I do to ensure that you're happy working at with the sheriff's department?" said Harry.

I can think of a few things. My mouth was dry, but I forced myself to look up and meet his gaze. I tried my best to banish sexual thoughts...and those damnable fluttering feelings thumping around awkwardly inside my chest.

Oh, his eyes were just so damned blue.

"It's fine," I said. "As long as I get paid." And it's enough to help the pack. "Flexible hours are good, too, when I'm working construction in the summer." At least if I could get any construction work this year.

He nodded seriously, paying careful attention to me. It was a heady experience.

"That's pretty much it." It would help if I weren't targeted by anyone inside or outside the sheriff's department for my involvement, but that was probably too much to ask. No, I would have to weigh any increased risk against the decreased risk of being run down (assuming being seen with the sheriff eating in public did affect that risk in the right direction).

Harry smiled at me gently, but in a slightly scolding way. "There's something you're not telling me."

I couldn't help grinning. It felt like we were old friends, even though we'd barely met. I put a hand against my chest, miming shock. A slightly camp gesture, but one I didn't feel funny making around him. "Moi?"

He laughed: a genuine, out-loud laugh, just from my nonsense joke. It made me grin harder; it made my toes curl up in my shoes. It was a delicious surprise, his laugh.

"All right, fair enough," he said. "I suppose you're allowed to keep some mysteries. I'd just hate to see you leave for greener pastures as soon as we get used to each other."

I looked at him, and thought, That is never going to happen.

And heaven help me, but that made my inner wolf as wary as anything that had happened in months. If already I didn't want to leave...and not just because of the pack, but also because of him...then I was in a bad way.

Dial it back, Clay.

My smile must have slipped, because he looked concerned. "Something I should know, Woodley?" he asked, a bit of tension entering his voice. "You already have another job lined up?"

He was really worried about me leaving...the job, not him. That was all he cared about, of course: the work I could do, the use I could be to him. And that was how it had to remain. Anything else was in my head, and shouldn't even be there.