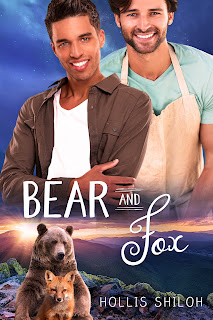 Bear and Fox
by Hollis Shiloh

Dane is a lonely bear shifter who doesn't know if he'll ever find a mate. Then one day he finds himself defending a fox from a brutal wolf attack. He's found his mate—and the fox shifter is scared of him.

Will Dane ever earn the trust of his mate, a shy, handsome, suspicious man who's had little reason to ever trust anyone?

Contains a honey-loving bear, a sweet, suspicious fox, gay uncles, a tiny bit of shifter politics, and enough food to shake a stick at.

Buy or borrow through Kindle Unlimited:

Contact me for review copies or other formats!  I'll send them to you free.
Posted by hollis shiloh at 11:48 AM 3 comments:

Martin and Josh
by Hollis Shiloh


A soft knock at the door.

Martin stirred, stretching arms over his head. The book on his chest fell, plopping to the floor. He’d fallen asleep reading it last night.

“Come in.”  Did the bed-and-breakfast include room service? He was too fuzzy-headed to remember.

“Sorry, did I wake you?” A friendly, freckled face peered round the corner, smiling apologetically.

Martin’s mouth fell open.  The guy had striking red, flame-like hair that seemed to have a life of its own.  It was long, reaching nearly to his shoulders.  Freckles stood out on his pale face, his expression shy.

“Of course I remember you.”  He sat up, pulling the sheets modestly to his chest.  A few years ago, when he was a young tutor still working on his teaching degree, Josh had been his favorite student.

Josh was only a few years younger, and they’d both felt a friendly connection, but kept from getting too close.  Martin was trying too hard to be professional to allow it.  But there had been something about their interactions that made him wish he was younger or Josh was older.

I’m an idiot for thinking about such things.  It must be his morning wood doing the talking.

“Er, yeah, I’m the cook.”  Josh reached up to push back a few strands of his gleaming red hair. “Just wanted to bring you your tea.”  He held up a blue mug.  “I hope I’ll see you again later.  Sorry if I woke you.”

“You—ah—thanks,” mumbled Martin, wishing he knew what to say.  It had been easier when they had rigorous homework assignments to get through.

Josh closed the door quietly, and Martin stared at its warm wooden texture, feeling bereft.  Josh’s cute face and striking red hair had filled his dreams more than once, although he always resolutely pushed away the images when he was awake enough to realize.  It wasn’t nice to fantasize about a seventeen-year-old.   But Josh wasn’t seventeen now…

Martin went for a walk after breakfast, hoping he’d see his favorite ex-pupil.

The bed and breakfast was at a peaceful, wooded area in beautiful Vermont.  Martin needed to rest up from a difficult year, catch up on his reading, and start writing the novel he’d been putting off for years now.

He rounded a corner of the quaint building and stopped suddenly.  Ahead was a small wooden bench, where a familiar redheaded figure sat looking up at the trees.

Martin stood still, just watching.  The breeze moved red hair slightly, and Martin felt his throat tighten with longing, and then his trousers, too.

He started to retreat, embarrassed, but his feet made a sound on a small branch; a little crunch.  Josh turned his head.  “Hi, Mr. Winston.”  His smile held an apologetic question.  “Sorry, you don’t have to go just because I’m here.  You won’t disturb me.  Sit down if you want.”  He patted the bench. “There’s plenty of room.”

Martin cleared his throat, cheeks heating.  He knew he was just being shy and awkward.  As usual.

“Thanks,” he mumbled.  He moved to sit beside Josh, wondering if he could fake the old attitude, that he related to Josh as someone older and more mature.

“Do you still tutor kids?” Josh cast him a shy look.  It was an intimate look, full of humility and interest.

“Ah, no, I’m a teacher now.  High school English.  Sometimes I miss tutoring, though.  Especially when I got to work with kids like you.  You actually wanted to learn.”

Josh blushed.  “But I was terrible at it.”

“You weren’t.  Learning disabilities don’t make you terrible.”  He hesitated, not sure if he was allowed to ask.  But he’d already said so much.  “Do you have trouble reading recipes when you cook?”

Josh shook his head.  “I make most things from formulas that I learned in culinary school.  I keep them up here.”  He tapped his head.  “And I make my own variations.”  He shrugged.  “It would be easy to mix up the numbers and letters in a cookbook, but I know what I’m doing now.  I know if I misread twelve as twenty-one, because it doesn’t feel right.  But mostly I don’t follow recipes at all.  Sorry, I’m going on and on.”  He pressed his knees together, hands between them as if to keep them from fluttering around, betraying his nervousness.

Martin longed to reach over and give his knee a gentle squeeze.  He cleared his throat.  “I’m glad you’ve done well.  I always thought you would.  That breakfast was wonderful, by the way.”

They sat next to one another in silence for a moment.  Yet somehow it didn’t feel awkward.

“It’s so nice to see you,” said Josh again.  “I think of you sometimes, wished I could show you I grew up…worth something.”  He blushed, ducking his head.  “That…came out wrong.”

Martin made a sound in his throat.  “Oh, Josh, you were always worth something.”

“I…I know…I just…”  He looked at Martin now, his ears pink, his smile slightly naughty.  “I wanted you to see me as an adult.  I guess you know I had a crush on you.”

“Did you?”  Martin found himself grinning, wide and teasing and full of delight.  He stretched out a little, putting one arm along the back of the bench—almost but not quite around Josh’s shoulders.  “Tell me more.”

Their eyes met, both gazes filled with relief and something more.

Maybe this unexpected reunion could be the start of something wonderful. 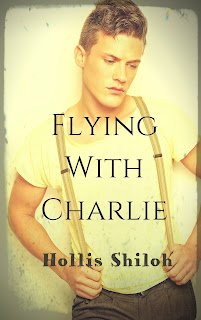 Nick needs a new wing walker. Charlie needs a way to escape his hometown. Surprisingly, they work well together. But Nick finds the fiery, vulnerable redhead far too attractive for comfort. He does his best to push Charlie away and protect himself. Charlie is amazing in the air and desperately drawn to Nick, even when he doesn't want to be. Nick does a good job of being unpleasant to Charlie, convincing himself it's better this way. But if he can't stop, he'll lose the man who's gotten past his barriers and into his brittle heart. Warning: contains angst
Length: 20,000 words

Contact me if you need review copies, other formats, etc.  Thanks!  :-)