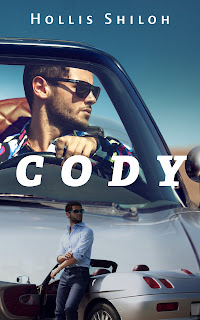 CODY
by Hollis Shiloh
Cody, a fox shifter, has been finding it challenging to do the homicide work he was hired to do.  He works without a partner, thank you very much.  He's starting to realize he might not be cut out for this work after all.  Should he just give up and quit, or is there a better option?
Robert, whose shifter partner died years ago, has been paying his penance by checking up on precincts to make sure their consultants aren't being put in the same dangerous situations as his partner was.  But he's been burned out for a while now, and starting to think he has to quit.
When they meet, they fall for each other fast.  It feels complicated to start a relationship this way, when they're both not on sure ground about what they want to do with their lives.
But how many chances does a person get at happiness?  Maybe it's worth the risk...
Cody previously appeared in "A Quiet Man" and Robert appeared briefly in "Foxed Up"
27,000 words
low heat
Amazon
Google Play
Patreon
Apple
Kobo
Amazon UK
B&N / Nook
Posted by hollis shiloh at 4:01 AM 2 comments: