I cried all through this... 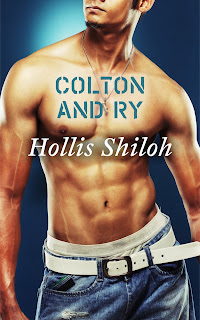 
Colton and Ry, by Hollis Shiloh


They had this thing. When neither was in a relationship, they… visited. With sex. And booze or the big game, and laughing together. But mostly sex. There was something easy and safe about going to bed with a man you trusted with your back during the day, trusted to save your life and get you back out of a burning building no matter what.

But what happens when Colton and Ry start to realize maybe they're more serious than they thought? How do they handle the next step—and Colt's angry ex?


They continued to razz each other through the meal, feeling better with every burn, insult, and laugh.

They were still hungry after they finished eating their burgers, so Colt made them each a second burger with melted blue cheese on top, and while he did that, Ry walked down the street to the bakery on the corner and bought two chunks of cheesecake. This time when they finished eating, they were full.

And then they got their shit ready for tomorrow, and went to bed for a horizontal mamba. Or two. Or three.

Despite all their tough talk, they stayed gentle with each other in bed. Maybe even a little gentler than normal. Colt touched Rylan like he was breakable.

And maybe he sort of was. He'd pretty much come out and admitted—to himself and to Colt—that his feelings for Colt went a little deeper than he'd maybe wanted to think about before. And when he thought about it too closely, it scared the crap out of him.

Colt was right; it changed everything. What were they supposed to do with this knowledge, if it was real—if they wanted a real relationship, not just a makeshift, make-do-and-mend intermediate thing?

Fortunately, it was hard to think too much with Colt in his bed, warm and giving and utterly present.

Sleep came easily that night, with them wrapped around each other, holding on tight. The comforting scent of Colt's sweat
Posted by hollis shiloh at 3:49 PM No comments:

The other week I was grocery shopping and I happened to see two guys grocery shopping together.  No biggie.  Didn't mean anything but...one of the guys was nervous.  He was a little shorter than his friend or boyfriend, and he kept sticking his hands in his pockets and sort of jittering and looking nervous.  His friend or boyfriend was really calm and just going through aisles, you know, taking care of business.

I couldn't help thinking they were a gay couple and the shorter guy was freaking out thinking, "Oh shit, now is somebody gonna come up and laugh?  Harass us?  What?  What happens next?"  It was a perfectly safe place, but he didn't seem to ever feel safe.  Like it took a big freaking effort for him just to go grocery shopping together.

He was shorter, but nothing about him stuck out as out of the ordinary straight American male.  If they hadn't been together, nobody would've thought, "A gay man."  Maybe nobody except me did now, either.

Nothing bad happened.  Nobody that I saw glanced twice at them.  But it was hard.  It was so hard for him.  My heart went out to him.  I hoped it would get easier, this kind of thing, when he saw it was okay to go grocery shopping and nothing bad was going to happen.  But you don't know.

I couldn't help thinking of the scene in my story "Falling for Archie" when the two guys go grocery shopping together.  They're so easy together, even clowning around and having fun.  But real life can be different, can't it?

It's not bad to have fantasies, stories where it's easy coming out and things are always happy.  But sometimes real life can be a little different.  I hope it's easier for him next time.  But I have a feeling they didn't shop together again for a while.


Posted by hollis shiloh at 3:39 PM No comments:

This week, all my currently published stories, with the exception of the Dreamspinner Press title "Adrian's Librarian," are on sale for 99 cents.

Full list here:  http://www.amazon.com/Hollis-Shiloh/e/B00BPXIMWO
Posted by hollis shiloh at 11:23 AM No comments:

I have three upcoming titles.

A story about two firemen learning how much they really do love each other!

I'll be releasing this story later this month through Spare Words Press, my self-publishing name.

[untitled]
A cop and an artist--once boyhood friends, meeting again under less-than-ideal circumstances.  There's a lot of water under the bridge--and a lot of love still in their hearts.

Also, this story has a Golden Retriever in it.  I modeled her shamelessly after my now-deceased dog, whom I still miss.  (Yes, she really was that sweet and gentle-natured!)

This story will be out in November from Dreamspinner Press.  (I can't tell you the title because we haven't settled on the final one yet!)

A reporter and a photographer, saying goodbye.  An end to their professional and personal relationship, and all the hurt and confusion (and love) it used to hold.  Is it the end for them, permanently?

This story will be published by Less Than Three Press - I believe in January 2014.
Posted by hollis shiloh at 12:14 AM No comments: