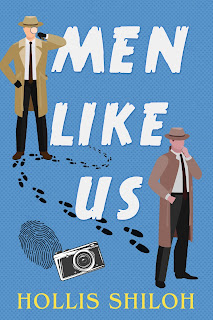 Ollie Boyd enjoys Jack Finley's company, likes to make him laugh, and wants to work with him...and maybe something more than that. It sure is confusing to have these feelings for another guy, and in the homophobic 1950s, it's not really safe.

Jack Finley finds time for Ollie, sure, but he's just humoring a friend. He's a tough private eye. He's certainly not indulging secretly in a crush, no matter how attractive or charming Ollie might be. Jack's smart and careful, and he's been around the block. It's hard enough to be who he is without taking on extra trouble.

But now Jack needs some help, after a botched Good Samaritan act leaves him broken in body and spirit. Ollie wants to be the one who's there for him. He also wants to figure out these feelings—even if they mean he's in pretty deep trouble.

A whole lot of bumps in the road—including blackmail and murder—might take these two down more dangerous streets than they'd guess...together.

Posted by hollis shiloh at 9:16 AM No comments: