This year, I've tried to have a release a month out.  It's not always been easy.  I'm finding that, especially when I write longer stories, it's not working for me.  My goal is to move to a month and a half between releases, and see how that works.  I don't like feeling burned out, which sometimes happens when I'm feeling rushed (and I know you guys don't like reading stories that feel rushed, either).

But I have another goal: make a Patreon account and offer readers who join a short-story-a-month.  I have several reasons for wanting to try this.  One, some authors are making it look really good right now!  Y'all are killing it!  Two, I gotta say, the monthly guarantee of a certain amount of money (as long as I hold up my end of the bargain) sounds...nice.  It's not something authors really get in general.  And three...I like writing short stories!  I miss it!

Anyway that's my goal.  A short story a month, and a book every 45 days.  We'll see what happens.

I'm really excited!  I've always liked writing short stories, but most people prefer reading longer stories.  So we'll see if there's enough interest (from readers) and enough ideas (from me) to do this.

1) I'll still publish the short stories elsewhere, but not for probably a month or two.  It's not that they'll be exclusive content, just "first" content.  Some will be in established worlds, some won't, but by definition, they won't be something you have to read in order to enjoy the rest of any series.

2) I'll probably try the Patreon short story thing for 4-5 months, and if I'm enjoying it, and readers are going for it, I'll keep doing it.  If not, I'll focus my efforts elsewhere.  Maybe try to speed up my novel writing, maybe not.
Posted by hollis shiloh at 10:29 AM 2 comments:

The Body in the Backyard 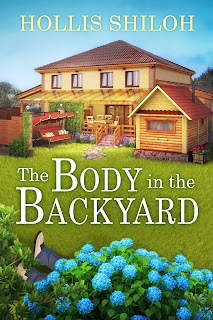 The Body in the Backyard
by Hollis Shiloh

Clarence Collin is pushing up daisies—in Abe's bed of zinnias!

When the caustic critic of a TV gardening show winds up murdered in Abe's well-groomed backyard, both Abe and his hunky-but-irritating neighbor Gregory might be on the suspect list.

Abe starts amateur sleuthing in self-defense...and to spend time with Gregory. When the two green thumbs look into their neighborhood's dirty little secrets, who knows what they'll dig up?

Goodreads link
Posted by hollis shiloh at 8:55 AM No comments: