I think it's time to test Kindle Unlimited again.  I'm planning to test it with the books in the "Marrying Men" series (except the first book which will remain free everywhere).

I will let you know when the books are in KU.   If you want to get them elsewhere, get them now while you can!  (links below)

In other news, I think I will be writing more shifter books.  I enjoy them.  I just don't know if the ones in future will fit neatly into a series.  It's very much a work in progress!  I really liked having a long-running series, but it started to become too restrictive with the specific job requirements.

Many of my books are now on Smashwords

Many of my titles are available on Hoopla, etc.  If your library grants access to ebooks,

mine are quite likely there.  They're free to you.  If you are interested, please check it out!

Here's the cover for an upcoming release: 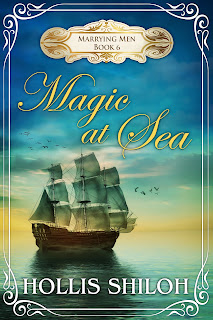 When Captain Reynard gets a magician assigned to his sailing ship, he's resigned to the worst. He's a fighting man of the King's Navy, and magicians are a nasty lot. But something about Jessop is irresistible.
Magician Jessop, small, grumpy, extremely touchy and on edge, has been deeply damaged by life. Touch is not easy for him, strangers are not easy for him, but against all odds, the crew takes him under their wing, and most of them are very kind to him. The captain especially turns out to be a gentle man, and his warmth undoes something in Jessop.
The captain falls in love with his magician—but does not dare speak those words aloud. The magician feels things for Reynard, as much as he's able to for anyone. Perhaps they might work their way to a satisfactory conclusion, commitment and happiness and a life together. But war is a dangerous time for love...

It's still very much in the editing stage, but I will put it up for pre-order at some point.  :-)

(and wishing you a much better next year),

Posted by hollis shiloh at 3:55 AM