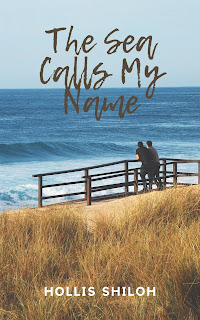 The Sea Calls My Name
by Hollis Shiloh
2nd edition
He lost his magic. How?
Returning to the bookstore by the sea, Daniel worries about how to tell his father that the money he saved to send his gifted son to magic school was a waste.
Daniel buries his secret under the pretense of coming home for a vacation. Then he meets Leaf Springfield, a beautiful young man who's been systematically beaten down by his uncle.
Irresistibly drawn to one another, they learn they share more than a love for raw fish and the ocean—they both lost a mother, and their ties to the ocean may be more fantastic than they can imagine.
Passion explodes between the two. It terrifies Daniel how quickly his feelings for Leaf grow. There may be more here than meets the eye—about both of them.
This is the second edition.  It has no significant changes.
Payhip
Google Play
Amazon
Apple
Kobo
Amazon UK
Scribd
B&N / Nook
Patreon
Posted by hollis shiloh at 9:47 PM