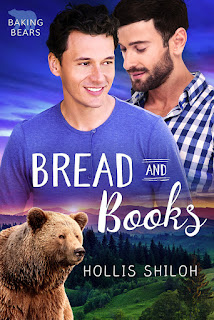 Bread and Books
by Hollis Shiloh

To Matthew, Jake is a mild-mannered mystery. He bought a failing bookstore, but he doesn't know how to run a bookstore at all. And by the number of books he's giving away, the man has to be an optimistic idiot. A business can't survive by giving things away!

Still, neighboring bakery owner (and secret bear shifter) Matthew can't help being drawn to him and finding excuses to talk to him. The man calls to him in a way no one else does: with his pheromones, his sweet smiles, and his cinnamon-colored eyes. He makes Matthew want things desperately...

The two men grow closer, and friendship turns to something more. They might even have a chance at forever, if they can bear to share their secrets with one another...

"How about two of those delicious buns?" said a familiar voice.

He jerked his head up and stared into cinnamon-warm brown eyes. Gaping, he could think of nothing to say. He hadn't been thinking about Jake that much, had he? Yet it seemed as though his errant thoughts had summoned the bookseller.

Today he wasn't wearing a tweedy suit and an old-fashioned look. He was wearing a bright yellow raincoat with big wooden toggles on it, and was shivering a little as he smiled at Matthew. He raised his brows, waiting for a response. His face was so expressive and the look in his eyes so intimate — all focused on Matthew, and friendly and warm and kind — that for a moment it was difficult for Matthew to breathe, let alone think or speak.

"Buns?" repeated Jake, pointing at the display case where the buns had been lovingly stacked by Matthew's hands not many minutes ago.

Matthew repressed the crazy desire to laugh. "Uh, hi," he managed at last. "Yeah. How many?"

Matthew fetched them out, feeling awkward, as if his hands were too big. He glanced at them quickly to make sure he hadn't started to shift and gotten big, oversized paws. Nope, still human hands: large, hairy ones. Awkward ones.

What was it about being watched by someone you wanted to impress? It made Matthew so much more likely to be awkward and clumsy.
He wanted to say something friendly and intelligent, or at least to ask how Jake was doing. He wanted to say something about getting here early, to ask how the day before had gone, something marginally intelligent, or at least not entirely stupid. Even a bland, banal comment about the weather (how cold it was today) would be welcome. Instead he was silently pawing out the two best buns he could find (there were always best ones, even when he tried to make them all identical). When he looked up, the sparkling dark eyes were watching him. Cinnamon eyes. Delicious, sparkling, shining eyes...

"How much?" asked Jake, his voice friendly. He'd gotten his wallet out.

Matthew might have been a bit tongue-tied around his totally-not-a-crush visitor, but his eyebrow, arched just so, spoke volumes.

Jake actually ducked his head and laughed awkwardly, his cheeks growing pink. "That was different," he said.

"When I gave out free books yesterday. That was different. It's..." He licked his lips, pausing.

Matthew found himself staring, more mesmerized than he should be by such a simple gesture of hesitation. Jake had some pretty amazing lips. Plump, pink, soft, and shaped like they would smile so easily — something Jake had already pretty well proved was true.

"It's part of my business plan," said Jake at last, and looked at Matthew as if he expected to be contradicted.

And then, wonder of wonders, Matthew found his voice again after all. "This is part of my friendship plan. Take the buns."

"I do like buns," said Jake, looking him right in the eye, smiling. "Thank you," he added, accepting defeat (and the buns) graciously. "But let me pay sometimes, okay?"

Matthew nodded, not necessarily because it was true; more because he couldn't resist that cute face. He really was being ridiculous, and he knew it, but some part of him found Jake impossibly irresistible. It was hard to be sensible.

And the fact that Jake wanted to come around and buy more in the future — a regular thing, even — made Matthew indescribably happy. Which was sillier yet. But it was hard to think of anything else just now.

"Thank you," said Jake, and headed out, giving Matthew a quick wave and letting the next customer approach. His smile was genuine, but he wasn't waiting around.

Matthew wished he could rush after him and say a million things that now seemed plausible, extending the conversation for at least another few moments, not being a tongue-tied, clumsy old bear. Instead, he had customers to wait on…

Posted by hollis shiloh at 2:25 PM